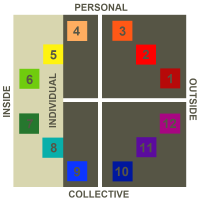 I have always been fascinated by the tension between the individual versus the collective.

How much of being yourself is too much? Do we have to liveÂ according our own personal values or do we have to follow the rules of society?Â How far do we go in following those rules?

Because of that fascination I was always very interested in models of reality. Models of the personal versus the collective. And models of development.

I studied many of those models and came to the conclusion that in essence they are very much the same. But in order to fit together they need someÂ different approach and a bit of renaming.

So for some time now, I am using a model on my blog that is based on several existing models. And the more I worked with that model, the more IÂ realized the importance of creativity.

So lately I was especially fascinated by creativity. What exactly is creativity? What is the difference between selfexpression and creativity? AndÂ between creativity and art?

Until I realized how much creativity has to do with the individual versus society. Actually as I see it now, it has everything to do with that.

Creativity is not just selfexpression. And it is not necessary art.

I think it is just about finding a pure and independent way of the individual, dealing with the outside world. Combine personal experience withÂ external information. Which has no other choice than to be unique.

The difference between creating and producing

Creativity literally means the ability to create. And to create is to make or produce.

How to do something is taught by others. Just follow the instructions that others give.

But that is not creativity. Most people will agree that creativity needs a more independent and individual approach.

Now I think creativity is extremely important. I really think its value is far underrated and it is often seen as something nice and great for children, but for adults it is just not very useful.

And in a way that is true. A life that is not based on creativity is possible. Because as important as it might be, it is not the most essential need we humans have.

Maslow used a model that shows a hierarchy in human needs. First are the physiological needs like air, food and sleep. Second are safety needs likeÂ protection and security. Third are our social needs like acceptance, belonging and respect.

After those needs are satisfied, the next need is creativity.

Development of a human being

The essence of the model that I use, is a development in three phases. I use the human life as a measurement tool and the phases are pre-individual, individual and post-individual.

Transitions are in puberty and midlife (although it might be much earlier or much later), puberty as the transition from a native background to
discover a unique personality and become an independent individual. And the transition in midlife from being a unique personality to being part ofÂ the world as a whole again, only now with an individual contribution to that world.

Now both are equally important. The only thing that is necessary is the timeline. Seeing the point of view of others has to come AFTER seeing theÂ world from a selfish and personal point of view.

Recently I read a book â€˜Science, Order and Creativityâ€™, that gave a great explanation of how that works. It says that creativity must get the chanceÂ to a completely independent growth.

Not criticized and also not praised or rewarded in the early stages.

But it is not enough to just BE creative, it is just as important to DEVELOP creativity. And so I thought I could use the model of development for creativity.

1. There has to be space for free play.

2. It has to be sustained, being focused and concentrated.

3. Learning from others, discussions and interaction.

7. Presentation and working together.

8. Defining value and defending against attacks.

9. See where it fits in society and start promoting.

10. Being constructive, seeking borders and becoming an authority.

11. Dialogue and seeing the essence of other creative individuals.

12. Sacrifice, selfless sharing with others.

Human development and the importance of creative individuals

Many problems can not be solved by using existing frameworks and using solutions in a mechanical way. Creativity needs the space to develop on its own.

The world needs people who can think for themselves. Who can create instead of produce. Who select existing information based on their own personalÂ experience.

Who can build something according to their own values and insights.

Not to conclude their view as the ultimate truth. But to get into a dialogue and look at all the views to find the solutions. 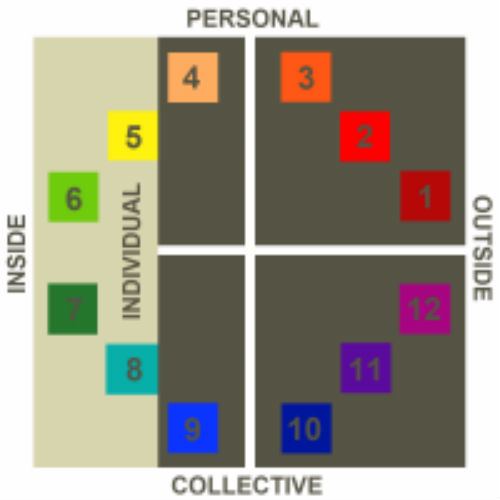