Combined with my Model of Development 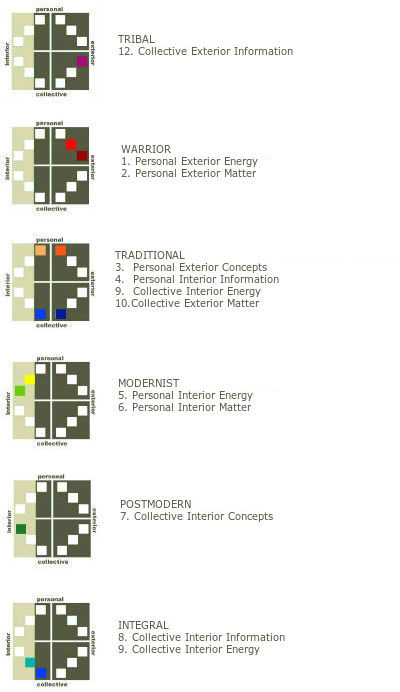 Beige
Archaic instinctive survival automatic reflex
From 100,000 BC
Express self to meet imperative physiological needs through instincts of Homo sapiens.

Purple
Animistic tribalistic magical animistic tribal order
From 50,000 BC
Sacrifice to the ways of the elders and customs as one subsumed in group.
This is the level of shamans, spirit animals, and medicine men.

Red
Egocentric exploitive power gods dominionist
From 7000 BC
Express self (impulsively) for what self desires without guilt and to avoid shame.
Expressed by the mentality of gangs, the vikings, etc.

Blue
Absolutistic obedience mythic order purposeful authoritarian
From 3000 BC
Sacrifice self for reward to come through obedience to rightful authority in purposeful way.
Embodied by fundamentalist religions.

Orange
Multiplistic achievist scientific strategic
From 1000 AD
Express self (calculatedly) to reach goals and objectives without rousing the ire of important others.
Expressed in the scientific revolution and the industrial revolution.

Yellow
Systemic-integrative
From 1950s
Express self for what self desires, but to avoid harm to others so that all life, not just own life, will benefit.

A. State of nature and biological urges and drives: physical senses dictate the state of being. BEIGE
N. Instinctive: as natural instincts and reflexes direct; automatic existence.

B. Threatening and full of mysterious powers and spirit beings that must be placated and appeased. PURPLE
O. Animistic: according to tradition and ritual ways of group: tribal; animistic.

C. Like a jungle where the tough and strong prevail, the weak serve; nature is an adversary to be conquered. RED
P. Egocentric: asserting self for dominance, conquest and power. Exploitive; egocentric.

E Full of resources to develop and opportunities to make things better and bring prosperity. ORANGE
R Muitiplistic: pragmatically to achieve results and get ahead; test options; maneuver

G. A chaotic organism where change is the norm and uncertainty an acceptable state of being.  YELLOW
T. Systemic: functional; integrative; interdependent; existential; flexible; questioning; accepting.

I. Too soon to say, but should tend to be I-oriented; controlling, consolidating if the pattern holds. CORAL
V. Next neurological capacities. The theory is open-ended up to the limits of Homo sapiens’ brain.