These are quotes from all over the web to give an overview of the concepts from Carl Jung.

Not intended to be complete but a reference for future blogposts.

According to Jungian psychology, individuation is the process of transforming oneâ€™s psyche by bringing the personal and collective unconscious into conscious.

Individuation has a holistic healing effect on the person, both mentally and physically.

Besides achieving physical and mental health, people who have advanced towards individuation, they tend to become harmonious, mature, responsible, they promote freedom and justice and have a good understanding about the workings of human nature and the universe.

A complex of ideas which constitutes the centre of my field of consciousness and appears to possess a high degree of continuity and identity.

In his diagnostic studies of associations was able to demonstrate unconscious complexes affecting the conscious mind and capable of causing disturbances in ego functioning.

His personal experience had led him to emphasize the extremely important role of a firm anchoring of the conscious viewpoint in the ego because, as he explained, the ego not only has to manage the conflicts with the external world but also to confront intrapsychic material that manifests and operates from the unconscious.

It is not only our conscious ego that possesses a capacity for organization, initiative and purpose: It is in fact the development of our personality in its entirety, including our potential for consciousness, that is “directed” by a center operating in the unconscious.

To distinguish it from the ego, Jung called this center the Self. ‘As the ego is only the centre of my field of consciousness, it is not identical with the totality of my psyche. . . . I therefore distinguish between the ego and the self, since the ego is only the subject of my consciousness, while the self is the subject of my total psyche, which also includes the unconscious’.

Jung devoted himself principally to the interaction between the ego and the unconscious and to the question of discovering how the ego can gain experience of a Self that is subordinate to it. He demonstrated that this is a task that belongs to the individuation process in the second half of life, which presupposes and requires the existence of a strong enough ego that can allow itself to be substantially influenced by the Self without thereby succumbing to a loss of boundaries that would be pathological if not psychotic.

So far as we know, consciousness is always ego-consciousness. In order to be conscious of myself, I must be able to distinguish myself from others. Relationship can only take place where this distinction exists.

The persona is also the mask or appearance one presents to the world. It is not a pose or some other intentional misrepresentation of the self to others. Rather, it is the self as self-construed, and may change according to situation and context.

The shadowÂ is a part of the unconscious mind consisting of repressed weaknesses, shortcomings, and instincts. It is one of the three most recognizable archetypes, the others being the anima and animus and the persona.

Everyone carries a shadow, Jung wrote, and the less it is embodied in the individual’s conscious life, the blacker and denser it is. It may be one’s link to more primitive animal instincts, which are superseded during early childhood by the conscious mind.

According to Jung, the shadow, in being instinctive and irrational, is prone to project: turning a personal inferiority into a perceived moral deficiency in someone else.

Jung writes that if these projections are unrecognized, the projection-making factor then has a free hand and can realize its object or bring about some other situation characteristic of its power.

These projections insulate and cripple individuals by forming an ever thicker fog of illusion between the ego and the real world.

Jung also believed that in spite of its function as a reservoir for human darkness-or perhaps because of this-the shadow is the seat of creativity.

In Jungian theory, the Self is one of several archetypes. It signifies the coherent whole, unifying both the consciousness and unconscious mind of a person.

The Self, according to Jung, is realized as the product of individuation, which is defined as the process of integrating one’s personality. For Jung, the self is symbolized by the circle (especially when divided into four quadrants), the square, or the mandala.

What distinguishes Jungian psychology from previous iterations is the idea that there are two centers of the personality. The ego is the center of conscious identity, whereas the Self is the center of the total personality–including consciousness, the unconscious, and the ego.

The Self is both the whole and the center. While the ego is a self-contained little circle off the center contained within the whole, the Self can be understood as the greater circle.

The anima and animus, in Carl Jung’s school of analytical psychology, are the unconscious or true inner self of an individual, as opposed to the persona or outer aspect of the personality.

It can be identified as the totality of the unconscious feminine psychological qualities that a male possesses; or the masculine ones possessed by the female. The anima is usually an aggregate of a man’s mother but may also incorporate aspects of sisters, aunts, and teachers.

The anima is one of the most significant autonomous complexes of all. It manifests itself by appearing as figures in dreams as well as by influencing a man’s interactions with women and his attitudes toward them, and vice versa for females and the animus. 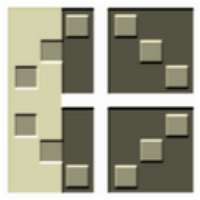