At the moment I am totally fascinated by a book called Cosmos and Psyche by Richard Tarnas.

In the book he writes about the aspects of the outer planets and the resemblance with the world history.

I read the book shortly after it came out in 2006 or so and found it really interesting. But somehow all the data and all the different planet aspects made me a bit dizzy. I remember constantly looking for timetables and graphics to get a bit of an overview of what I was reading. And after that, other interesting books came along.

But recently I came across a video of Richard Tarnas. He said some very interesting things about what was happening in the world and the aspects of the outer planets that resembled those processes.

I wanted to go read the book again but I could not find it anymore. I guess I never bought it and maybe read it from the library. Anyway, I just had to have the book myself and bought the ebook. Which is great actually because now I could easily search for certain parts.

But still I got dizzy from all the data and all the events. So I looked for a way to make it more visible. I started with what I am doing all the time on this blog, by making a visual in cycles.

But somehow I also needed a timeline. I tried out several ways of making one, but it did not work very well. I wanted to make a visual from at least around 1900 to now. But in those more than 100 years a lot happened and I could not get it all on one clear visual.Â In my mind a timeline was horizontal, and to get enough data in, I would have to scroll from left to right. Which is not a very comfortable way of reading online.

Until my husband asked me why I did not make a vertical timeline!

Of course that was the solution. A vertical timeline is fantastic, I can make it as long as I want. Scrolling down is no problem on a blog and also on mobile it works great.

So I started with the conjunction of the 500 year cycle of Pluto and Neptune. The conjunction was just before the start of the 20th century, around 1892. Very soon after that was a Uranus/Pluto opposition and in between, Saturn made important aspects with all three of them.

In the book, Tarnas covered a lot of history. Which was very interesting and gave me a real good idea of certain processes and the big picture.Â But at this point I wanted to focus mainly on the more recent history and also our time and a few years ahead. So I took the timeline from 1890 until 2020.

My next focus was on the Uranus/Pluto cycle. Tarnas calls Uranus the Promethean archetype of rebellion, progression, disruption and unexpected change.

And Pluto is the Dionysian archetype of instinctual and compelling power, extreme in its intensity and arising from the depths and on a massive scale.

Together in hard aspect (conjunction, square and opposition) they reflect radical social and political change. Destructive, rebellious, revolutionary and intense.

An atmosphere of gravity and tension.Â Profound transformation, as with the Uranus/Pluto cycle, but here the transformation is through contraction, conservative reaction, crisis and termination.

Although maybe just as important, the cycles that include Neptune are not that visible in events in the outside world. So in my timeline I gave all aspects with Neptune a soft grey color. This seemed to fit better with the more nebulous and subtle archetype of Neptune.

In this timeline I did not include Jupiter, as that would make the timeline too full at this point. But I certainly want to include it in future timelines as it is a very important aspect in relation to expansion and creativity, certainly in combination with Uranus. Tarnas gave some interesting examples of that.

Also the squares of Saturn are not included here as that would give to much data at this point. But also for future timelines I certainly want to include them as they point to rather exact data, like the Saturn/Pluto square at the beginning of the second worldwar. But that is for another timeline in another blogpost. 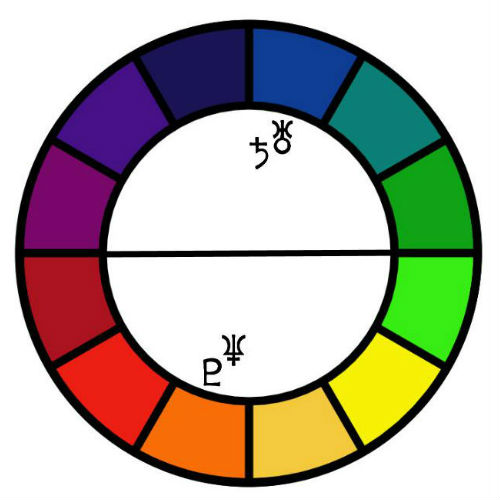 Always Together but Not the Same
Science and the Collective Unconscious