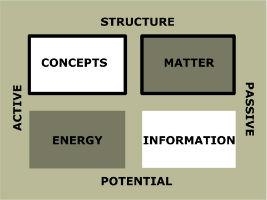 In myÂ previous postÂ I wrote about values as being transitions from one phase of life into another, that I placed in a model of development.

In this post I want to write a little more about the model of mind and matterÂ where the model of development is based upon. How the four elements relate to each other. Where they are similar and where they differ.

Structure is the visible world of matter and concepts. Although concepts might not look as visible as matter, in a way they are just as visible. Every object we can observe is at the same time a certain concept for the person that is observing it. A chair is something to sit on for us, but for a small child it might Â just be an obstacle in his discovery of the world, or an exciting climbing frame.

So something is a blob of matter until the concept we make of it determines what it is. But we hardly ever seperate those two, because as a child we learn from others whatÂ itÂ is and what we should be doing withÂ it.

Information as in an acorn that knows it has to become an oak tree and not a willow. And energy which can be released, as in an atomic bomb or an exploding star.

But at the same time, energy and information are outside, everywhere. Where it has the potential to be used (energy) and known (information).

Passive is the world of matter and information. Both are inert and need the active part to do something.

If all the energy is locked up inside the matter, it will not move, like a rock. If no concepts are used to do something with the information, it just stays still, like a deep silent lake.

Active is the world of constantly moving energy and concepts.

Energy that needs matter to be constructive. And concepts that need information to stay connected with the world around.

Two sides of one coin

The coin being all four together. With matter/energy on one side and concepts/information on the other side of the coin.

Side one is the side of matter and energy. That side that according to some, is all there is.

I did an attempt in the post Is our world dualistic after all, to find out how that works.

But I think there is another side, the side of concepts and information.

Always together but not the same

Like a coin, both sides (matter/energy and concepts/information) will always go together. But they are not the same. So information can not go over in energy.

But it can inform energy. 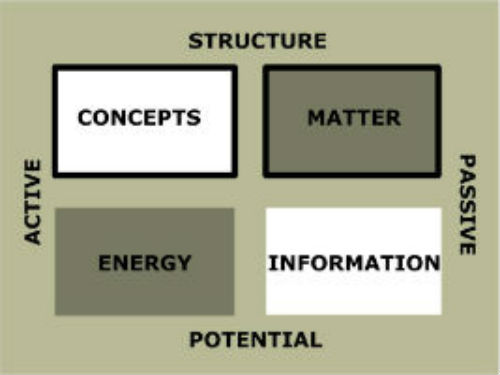 About Development, Values and Transitions
Cycles and Timelines