The previous post was about two different instincts, the sensuous and the formal instinct.

Two instincts that are opposed and that make us struggle to integrate in our human nature.

This is again a post about The Letters on Aesthetic Education of Man from Friedrich Schiller, like a few of my previous posts.

I am trying to understand what he says, by using his words as much as possible, but re-arranging his sentences, because (for me) he is rather difficult to read.

But I think he says some really very interesting and important things about human nature, that I did not find anywhere else yet so extensively explained.

At this point I get to where Schiller comes up with a solution for the problem of those basic, but opposing, human instincts. Schiller saw the solution in a third kind of instinct. An instinct that he calls the instinct of play.

Before I start with that third instinct, first a short overview of the two opposing basic human instincts according to Friedrich Schiller.

The third instinct lets them play together

So because those two basic instincts are each others total opposite, and because they can not be integrated in the human nature, Schiller noticed something else. A third instinct that he calls the instinct of play.

The instinct of play, in which both act in concert, will render both our formal and our material constitution contingent; accordingly, our perfection and our happiness in like manner. And on the other hand, exactly because it makes both of them contingent, and because the contingent disappears with necessity, it will suppress this contingence in both, and will thus give form to matter and reality to form.

So the third instinct (the instinct of play) lets the two opposing instincts (the sensuous and the formal instinct) act together. Even though they are each others total opposite, it is possible to play with them, let them be there at the same time.

As long as they are playing together, there has to be no conclusion on what is true and what is false. During the play, the mind can be physical and moral at the same time.

Feeling in harmony with reason

The play takes the dynamics out of feeling and passion. And it takes the moral out of reason. So feeling can be in harmony with rational ideas.

There shall be a communion between the formal impulse and the material impulse – that is, there shall be a play instinct – because it is only the unity of reality with the form, of the accidental with the necessary, of the passive state with freedom, that the conception of humanity is completed.

So the instinct of play makes a communion possible between two opposing instincts. They exist together without a final conclusion.

Somehow this communion has to do with what Schiller calls beauty. Beauty that can not exist without one of the opposing instincts. It needs both. And as a result it needs the third instinct of play to let them exist together. 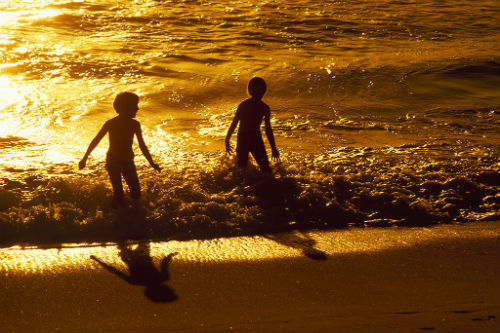 Sensuous and Formal Instinct
Polarisation and That what is Inbetween