This week I found another interview with David Bohm.

Somewhere in that interview he talks about why we need the space to develop creativity.

He wrote about that in the book Science, Order and Creativity and I already have several posts about one chapter of that book.

The chapter states that creativity is very important, but it does not always get the chance to come into existence. And that it needs independent growth, which means the opportunity for free play in the early stages of development.

It becomes clear that it is often difficult for people to be creative. And even more difficult to develop their creativity.

And personally I am fascinated by that. Why is that so very hard? I talked about that in several posts already and think that it very much has to do with an essential difference between two types of people.

In the post Inner Drive or Navigation from Outside, I wrote about those who have this overwhelming inner drive, and those who don’t. Or maybe they do, but they manage to suppress it.

That post expressed very much my personal feeling about how that works with people, but in the interview with David Bohm, it became clear to me that he also thinks there is this essential difference between two types of Self.

I think it all has very much to do with the transition from a pre-individual state into becoming an independent and authentic individual, a subject that is coming back on this blog every time because I am fascinated by it. A certain place on the model that I use on this blog.

It is a transition that I think is essential for every human being, but is at the same time a very complicated and, for some, very difficult process.

In my following post I want to quote what Bohm has to say about that and give my own understanding of what he says. 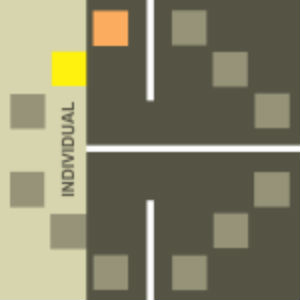 The 7 Links Challenge
Me, my Self and I