This is the third time I am going to upload the same video on this blog.

The reason for that is that I think this video is extremely important. I think it gives a way out of a very old problem. The problem of choice between Monism and Dualism.

It is a video of the physicist David Bohm. It is one of 5 videos that completes an interview with him from 1989 in the Niels Bohr institute in Copenhagen. The whole interview is also uploaded in the post Information Exchange.

In the post Making a Concept of the Whole I already uploaded this video (part 3) again because I think he says some very important things there. In that post I transcribed as good as possible the video, and in the post Make the Quantum World Understandable I already highlighted what struck me most in that video.

But everytime I watch it again (and I did so many times), and every time I think about it, I can only come to one conclusion.

Bohm thinks that the very essense of our world is dualistic.

In this post, I first define the difference between Monism and Dualism (Wikipedia) and give my understanding of Bohm’s view. Then I upload the video again and extract the parts where I think Bohm says our world is dualistic in its very core.

Monism is any philosophical view which holds that there is unity, that the universe is really just one thing, despite its many appearances.

1. Materialism: only the physical is real, the mental or spiritual can be reduced to the physical.

2. Idealism: only the mind is real.

3. Neutral monism: both the mental and the physical can be reduced to some sort of third substance, or energy.

The term dualism was originally used in metaphysical and philosophical duality discourse but has been diluted in general or common usages. Some examples of what can be seen as dualistic.

Dualism according to Bohm

Now I do not think that Bohm says that the core of our world is a dualism between Good and Evil, or Male and Female, or Yin and Yang. Maybe he thinks those are dualistic, but it is not what he is talking about here.

What does play a role in his view is the duality between Mind and Body, although not directly. Like many others he thinks that the core of our world might be energy.

But he does not think there is just energy. He says there is something else that is essential, but is not the same.

One can not be reduced to the other. It is something that is really so very common in our day to day life, but does not play a role in measurements. But it has a fundamental effect.

And that other important core element is information.

Here Bohm starts with explaining where his view differs from Niels Bohr, which is the mainstream.

But the one thing I did not agree with, was that this whole was completely, there was no way of making a concept of this whole, And that meant that you cold not make it intelligible, the mathematics could only refere to the probable results of experiments, but not discuss what was actually happening.

He says there are other fields like the electromagnetic field.

In the following part he gives an example which I had to listen to many times. It is something so common, but as he says also the very difference between day to day experiences and measurements in science where the effect of the information is left out the equation, while it is an essential part of that.

That is not so weird. In fact it is very common, but we generally don’t pay attention to it. If you take for example a radio wave. Its effect calls up. Now imagine a ship guided by radar on an automatic pilot. The guidance does not depend on the intensity of the wave. It depends only on the form, we may say, that carries information. The word information has two words, ‘in’ and ‘form’. To put form in. You only need a sensitive receiver. As long as it is received, it is essential the same program. What happens is, that the form of the radiowave puts form into the currence, forming the receiver. The energy comes from the reciever, not from the radiowave. The radiowave is not pushing the ship around mechanically. The ship is moving under its own energy and responding to the form. The radiowave is giving shape and form to its motion. It is all human experience. People do not push and pull each other around, except when they are violent. They depend on the sound of waves to communicate, people move around because of that. The point is, that this is the most common form of experience and the mechanic business of pushing and pulling is more limited, but our experience of the last few centuries, has us focussed on that as the main point. And saying, we can always explain the other things though that. But I am saying ‘maybe form is fundamental and the electron responds to this form’.

So by bringing in information, there would be a solution for many things that could not be well explained otherwise.

The basic quality of mind, is that it responds to form and not to substance. And therefore, the electron has a mindlike quality. Not conscious as we know. Consciousness might depend on much higher organisations of this mindlike quality.

Then the interviewer asks if that information (plus mind and consciousness) are the basic of our universe. So actually he asks if our world is monistic, as in only the mind is real. But Bohm says it is both.

Interviewer: So what you are saying is that the physical universe is really more about information than about substance.

Bohm: Well, I am saying it is both. But information contributes fundamentally to the quality of substance.

So Bohm says information (mind) is just as important as substance/intensity (matter/energy). And one can not be reduced to the other. That means our world is not monistic.

So that can only mean that the world is dualistic. But not in the way that dualistic is often seen. At least not at the very basic level. It does not mean there is no such thing as the duality Good and Evil, Male and Female, Yin and Yang. But those maybe can be called ends of a spectrum or something like that.

I do think what Bohm is talking about here has something to do with the Mind and Body duality. But personally I think it would be better to speak of the duality between Mind and Energy here at this point. Or as Bohm calls it, between Information and Intensity/Substance. Where one can never be reduced to the other. 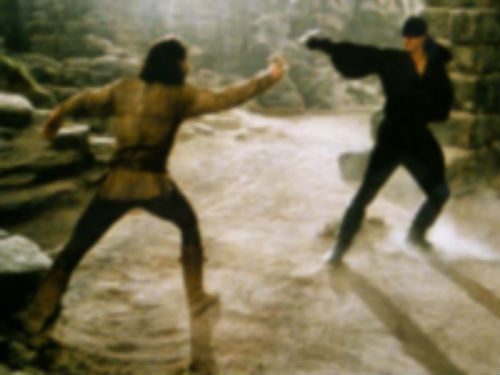