After spending a lot of time trying to understand the structure of the rheomode, the experiment of David Bohm with language, I suddenly stopped and asked myself ‘what again was the reason for him to do this experiment’?

He explains that in his book ‘Wholeness and the implicate order’, but because the book is way over my head in many chapters, I kind of lost the bigger picture.

But then I remembered an interview with him, where he says it in a way that somehow made it more clear again for me. It is an interview on YouTube, spread over 5 videos, that I uploaded some time ago in the post Information Exchange.

I was blown away by the whole interview, but I remembered I especially was impressed by the third one. I had the feeling that what he said there, was extremely important, although I did not understand it completely at that time.

So I listened to it again and tried to make more notes. In this post I will upload that video with a transcription (as good as possible) and at the bottom I want to describe my understanding of why he needed to adjust our language.

Interviewer: 50 years before the general societal condition, called the ecology crisis, they have seen the breakdown of the description of parts?

Bohm: Yes, it really began to be clear about 1930 or so, with Einstein and Podolsky it was ..

Bohm: Yes 1935, but people had a feeling for it even before, without expressing it.

Interviewer: Why could physicists see this breakdown of the description in parts, 50 years before general society?

Bohm: Well, they where working in a rather restricted area where the evidence was such as to bring it out. Because the area was limited, it was possible to focus more on the problem.

But the whole social problem is far more complex, it is so complex that people could always say, maybe it is not that way.

Interviewer: But isn’t it still surprising that you’re able to go from physics into more general problems?

Bohm: Not to me, you see that is the sign of the wholeness. That was the medieval view that everything was an analogy to everything. The human being was a microcosm of the macrocosmos, so that he had implicitly in him the possibility of understanding.

The general view before our modern times was more favorable to wholeness. In Europe as well as in the East.

Bohm: Yes, well, I wouln’t … I would say … in some sense I would say it is the mainstream, but I don’t think a great many physicists really understand it very well, because it very subtle.

Originally I was very much in favor of the Bohr interpretation, which seemed at that time the best. It is very subtle and hard to explain.

But basicly it emhasisis this wholeness of the observing instrument and what is observed, that they are one whole and they are one phenomenon.

And many of the lines of what he said would be along the lines I have just talked about, that it why it attracted me. I won’t go into more detail about it, because it is very difficult.

But the one thing I did not quite agree with, was that this whole was completely, there was no way of making a concept of this whole.

And that meant that you could not make it intelligible, the mathematics could only refere to the probable results of experiments, but not discuss what was actually happening.

So I developed later in 1951 or there about, another interpretation where I said that the electron is a particle for example and than it has a quantum field represented mathematically by its wavefunction. And this field and the particle are together and they … the properties, the quantum properties of the electron.

If you think of a waterwave, it is spreading out, the core … the more it spreads out the less the core …

Now the quantum field would be capable of, sometimes, of spreading out the electron of far away move with the same energy of move close. This would be the kind of information of a discrete quantum process.

Interviewer: So you have a field that does not drop off?

Bohm: The field drops off, but its effect does not. The effect only depends on the form, not on the intensity.

Interviewer: That is weird!

Bohm: That is not so weird. In fact it is very common, but we generally don’t pay attention to it.

If you take for example a radio wave. Its effect calls up. Now imagine a ship, guided by radar on an automatic pilot. The guidance does not depend on the intensity of the wave. It depends only on the form, we may say, that carries information.

The word information has two words ‘in’ and ‘form’. To put form in.

You only need a sensitive receiver. As long as it is received, it is essential the same program. What happens is, that the form of the radiowave puts form into the currence, forming the receiver.

The energy comes from the receiver, not from the radiowave. The radiowave is not pushing the ship around mechanically. The ship is moving under its own energy and responding to the form.

The radiowave is giving shape and form to its motion.

This goes back to an old idea of Aristotle who says there can be a formative cause. Now this is very common, we have it not only in radio. The computer has a form which is carried out in the process of … machinery.

You can have DNA, the form of the DNA determines, is carried to the RNA and determines the making of proteins. It is in all human experience. People do not push and pull each other around, except when they are violent.

They depend on the soud of waves to communicate, people move around because of that.

The point is that this is the most common form of experience and the mechanic business of pushing and pulling is more limited, but our experiences of the last few centuries, has us focussed on that as the main point. And saying we can always explain the other things through that.

But I am saying ‘maybe form is fundamental and the electron responds to this form’.

So that means we have quite a different principle of explanation, this wavefunction which operates through form is closer to life then mind …The basic quality of mind, is that it responds to form and not to substance.

And therefor the electron has a mindlike quality. Not conscious as we know. Consciousness might depend on much higher organisations of this mindlike quality. Many mindlike fields could arise, which we don’t know, in human beings, in life and animals.

Interviewer: So what you are saying is that the physical universe is really more about information than about substance?

Bohm: Well, I am saying it is both. But information contributes fundamentally to the quality of substance.

So far this video. I was planning to write here about my understanding of what Bohm said. But I am having a lot of problems to save this post, so I want to go into that in my next post. 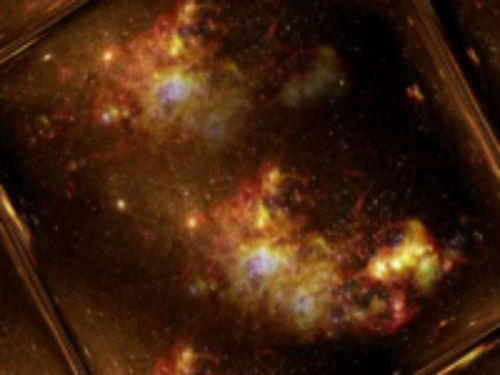