Okay, so the words that I want to use in the context of this blog are clear now, defined on the page Basics. The next step is to describe my understanding of development.

Development as a growth in complexity that can be seen everywhere around us and which is perfectly reflected in the cycle of the zodiac.

Now the words and concepts that I want to use here are especially chosen for the human development.

A word like vision, that I will use for sagittarius, is an aspect of the archetypical image of that sign, but expansion is also an aspect of that image.

The universal part means that the individual is becoming aware of being part of a bigger whole. And so the sign sagittarius is also the image of travelling and philosophy.

For the dividing in four, I use the words from integral theory. That is, IÂ use the words objective and subjective, but instead of individual and collective, I chose personal and impersonal.

The reason for that there a some words that are used in Integral that are the same as in astrology, but the meaning of the words are a bit different. So to use the words personal and impersonal is meant to differ between under the horizon and above as in astrology. 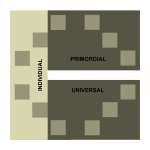 And the signs that I see as Individual are so, only potential. A sign like virgo has the potential to develop individual skills that are a result of an inner drive, but can also symbolise being the perfect servant of someone else.

Ego Development
What versus How